A set of 8 saucers for Avventura, NYC, unloaded out of today's kiln...

Posted by Mary Anne Davis at Monday, June 30, 2008 No comments: Links to this post

We have a name. We're "Greenfluencers," according to the new Porter Novelli report. We may represent just a sliver of your market, the report says, but we guide the green conscience of your entire market.

from No Impact Man, Collin Beavan.

Posted by Mary Anne Davis at Saturday, June 28, 2008 No comments: Links to this post 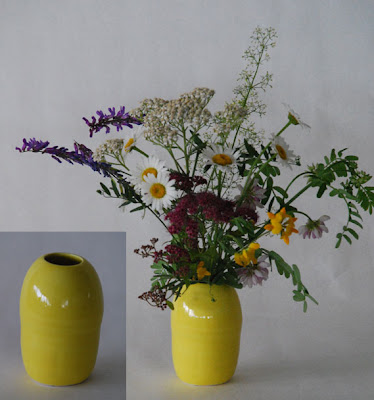 I picked this bunch of flowers just circling my studio. Mostly wild flowers or WEEDS in some people's books... Beautiful. I am married to a guy who is a fanatic when it comes to weeds. He just loves to figure out what they are... Oh, that little vase is part of my seed vase project. Just started new blog here for it. Interactive. :-)
Posted by Mary Anne Davis at Thursday, June 26, 2008 No comments: Links to this post

Micro-Production: Part of the Solution

Umair Haque posted a Manifesto for the Next Indutrial Revolution and people are talking about a lot this morning and over the weekend. I am delighted to see this esteemed academic write such a thoughtful and to the point article about the worlds problems and even more excited that it is gaining so much traction around the web. Alexander Elsas wrote about it here in response to Fred Wilson writing about it here.

I add : Organize the world's Production

While Fred Wilson expresses the potential for boredom in Web 2.0, Umair's post seems to come just in the nick of time. His words and ideas may spark that which he has called for; a revolution. Local economies are the backbone of any region. Give away your ability to make and do for yourself and you give away your ability to sustain life. Sustainability has to include strong local economies, perhaps local currencies but most important, the ability to produce the basic needs of a population with in a specific region. The people who will get on the ground and make that happen are the young people working with mentors, locally and experts, perhaps from abroad. But, listening is essential in the process.

Much compost has been laid on these principals over the decades. Yes, the invisible hand may have been an illusion all along. Crafting a life, in community and in a region, these are the issues of our time.

Here is an earlier post of mine, called Techno Swadeshi, that talks about making and connecting.

Posted by Mary Anne Davis at Monday, June 23, 2008 No comments: Links to this post

Clay Shirky on the TV Bender

OK, so I am having a little too much fun posting short videos. This one is totally awesome. A talk from Web 2.0 conference about how everyone is and will contribute more and more to everything.

Posted by Mary Anne Davis at Thursday, June 19, 2008 No comments: Links to this post

I love this Man

I have to write this post. I had an insight yesterday I felt would be perfectly expressed here and today's paper just inspires me further to state it. Here goes- The high price of oil is more about getting as much profit from the final days (OK, years) of the fossil fuel economy as possible, because, well, alternative energy and conservation are the future. Like a tsunami... Exxon, Getty, BP, their days are numbered, at least as the force they are today. Peak oil, well, maybe. Global warming? I think yes! Our collective wisdom is winning and the oil companies know it. The advent of the post fossil fuel world is here. Toyota has surpassed Ford and GM as the leading auto mobile manufacturer in the world for one reason. The Prius. Can you say 45 miles per gallon?? (well, they run a pretty tight ship too)

There is lots of talk from the CEO of GM about the return of electric car. Energy star is the new standard in all home appliances. Radiant heat, solar panels, better insulation, the rising awareness of local food, for taste, health and inherent goodness, well the list goes on. The environment will win because we DO want to survive. This will preclude the end of the fossil fuel era as we know it. As demand decreases, profits will plummet and the current kings of the economy will experience a dramatic seat shift.

Posted by Mary Anne Davis at Saturday, June 14, 2008 No comments: Links to this post Just sent a bunch of stuff off to Tournesol, a fab store in Pittsburgh, PA. Stop by and say hi to Barb if you are in town.

Posted by Mary Anne Davis at Tuesday, June 10, 2008 No comments: Links to this post

Wonderful designer, worth the 17 minutes to watch... He says "advertising is the price companies pay for being unoriginal " in this talk, which I see is new meme.