Summer in the studio 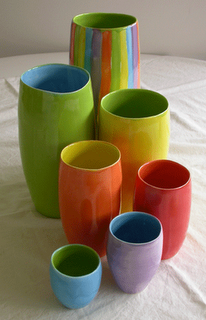 Summer is here, and experimenting with summer colors on dinnerware and vases (for the gardner's boast) has been fun. Here are some new pieces, hot out of the kiln. More on my kiln opening blog. 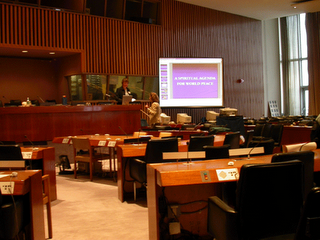 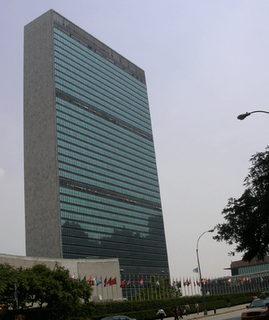 Yesterday I got up at 4:30AM, hopped a train to new York City and attended a conference on spirituality and peace at the UN. While the conference itself was a little, well, shall I say, all over the place? It was a remarkable experience. I sat in one of those chairs with the mike, head set, surrounded by booths where interpreters sit during an international meeting where translators are necessary to convey important ideas and opinions of world leaders who don't all speak in one language. (think Nicole Kidman)

The UN has been trashed a lot, especially by the US (John Bolton!! scary dude) because it is seen as ineffective. But, it is only 60 years old. There was a women there who spoke at the end of the meeting. 91 year old Rose said she has been going to meetings there for 50 years and she was enthusiastic about this forum because it was addressing spirituality (not religion) and the openness of communication. The UN is international territory within the US and it is indeed an exciting place to visit.

People there were dressed in all kinds of outfits; traditional dress of native lands and robes of monks, nuns and a culturally diverse micro population. It is a place where everyone can speak and hopefully be heard. It is not a perfect solution to the world's problems, but what is our option? 60 years is not a long time for any institution of this magnitude to exist. If Rose is right, and who can argue with a 91 year old with 50 years experience? Then the UN indeed is on the right track.

Reform is needed, which we discussed. The security council needs serious restucturing. Most important thought, the UN needs funding. It is hopelessly underfunded. In fact, the US hadn't paid its bill in so long, a few years ago Ted Turner paid $1,000,000,000. out of his own pocket to keep our (USA) membership in good standing. That's 1 BILLION dollars, folks! Well, I think that used up his cash, 'cause he's kind of broke (for a billionaire) these days.

Our government will spend $441. billion dollars for the military in 2006 and is planning on spending $462 billion in '07. see Military spending here That's a budget 7 times larger than the next highest spending country in the world, China.

We are so over the top in military spending it's a bit, well, embarrassing? scary? unnecessary?

This money comes from our federal tax dollars. We're paying for this situation! What if we reduced the military budget by, say 10% ($44 billion) and paid our dues to the UN, created a free educational system, universal healthcare and a .7% donation to the developing world (which we have promised but never done)? Hmmm... What could we do with a 20% reduction? 30%? You get the picture.

What's so cool about the UN is it is a place where citizens of the world are invited to participate, not just heads of state. In fact, we are encouraged to be part of the process. The UN represents the potential of a world democracy, imperfect at present (and probably forever) but an inspiring glimpse into the possible. 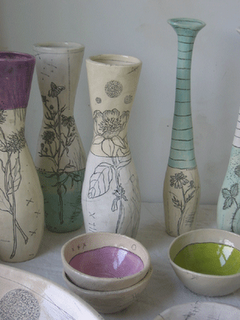 Not too many potter's blogging at this point, but a new voice, the talented Diana Fayt, has joined the fold. Check out One Black Bird. Coincidentally (if you believe in coincidences;-)) she lives 10 minutes from me!

At last! I've been making pots, firing them and opening kilns regularly, but it has been a while since I posted a new kiln. Check out my kiln opening blog now for some of the latest davistudio fine porcelain goodies, hot out of the kiln. The pieces here are for Greenjeans, Brooklyn, my favorite store... See the new work in person there.

Seth's posted a new list called How to Get Traffic to Your Blog. He is famous for NEVER having comments on his blog, and yet, here he breaks with tradition and puts a comment section. What's with that? Doesn't he have any integrity about his own rules?!? What I love about this post is that every other suggestion contradicts the one before and his comment section contradicts his own rule. I think this is a great post which shows how blogs break all the rules, anything goes, it's your blog, do whatever you want and well, there you have it. See if you find it as thought provoking and entertaining as I did...(btw, blogger spell check thinks blog is misspelled...what's with that?)

Amy at Greenjeans has done a fab riff on my post about poppies yesterday... Check it out here! 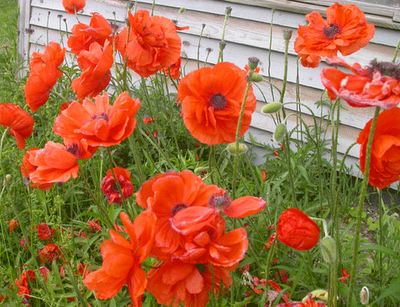 It's June first and I have had a great time gardening over the weekend. I am posting this picture of poppies, extravagantly blooming in my yard, mostly volunteers, as an homage to Susan Larochelle at ArtEsprit. Her paintings over the winter of poppies are a marvel. Gallery owner and talented painter and teacher, mother and regular blogger. An inspirational friend met through blogging.

Speaking of blogging, it is approaching the 6 month mark since Modern Table Art began. I have to say it has been an eye opening journey. Reading blogs, writing them and sharing comments has opened my world enormously. Living in the country is no longer an isolating experience. Here's to the next 6 months.