The BerkShares local currency program has been named a finalist for the
prestigious Peter Drucker Award for Non Profit Innovation. The winner of
the $35,000 Award will be announced in November.

BerkShares has also applied for the Buckminster Fuller Challenge, carrying a
$100,000 prize. A copy of the application follows for your information.

Either award would mean additional funding to take BerkShares from a simple
buy local program to a more complex citizen initiated tool for shaping the
future of the Berkshire economy in a sustainable manner.

What will a fully developed program look like? Well one quality will be
that participation will be so widespread that you and other businesses will
have multiple opportunities for recirculation making redemption at a
discount unnecessary.

In the meantime we encourage businesses to adjust acceptance in a way
appropriate for the your business while creatively finding ways to expand
the program in the local economy. We welcome your recommendations for new
BerkShare participants.

Thanks for being a pioneer of an evolving and innovative program.

Susan Witt for the BerkShares Team

Urgent Issue of our Time

E. F. Schumacher argued that if we are to achieve a sustainable economic
system (what he called an economy of permanence), then the goods consumed in
a region should by and large be produced in that region. With shorter
supply lines and fewer intermediaries between the producer and consumer,
fuel use is less and carbon dioxide emissions decrease. Individuals engaged
in their local economy may rely on more trips downtown but on fewer trips
across oceans and countries.

Consumers are more likely to tolerate poor labor conditions and
environmental degradation when they are made invisible by the distancing
effect of the global economy. Incorporating production into the local
economy helps to illuminate poor practices and their impact on the
community. Ultimately we learn that content workers, sustainable farming
practices, and a healthy environment lead to increased productivity and
decreased true costs to the consumer.

Accepting the urgent need to change production patterns from global to
local, the question becomes, How can concerned citizens help create
conditions that foster more self-reliant local economies in a manner that is
socially, environmentally, and culturally responsible?

In her book ³Cities and the Wealth of Nations,² Jane Jacobs suggests local
currencies as an elegant tool for rebuilding regional economies in a
sustainable way. She believed that currencies circulating only in a defined
region encourage import-replacing businesses, which in turn create new jobs,
foster technological innovation, retain manufacturing skills, and further
regional capital.

BerkShares is the local currency developed by the E. F. Schumacher Society
for the southern Berkshire region of Massachusetts. The notes were first
issued in September of 2006 in cooperation with BerkShares, Inc., a
non-profit membership organization. The program was designed to create
consumer awareness about the consequences of spending practices, to support
local businesses, to facilitate the development of new productive
capabilities in the local economy, and to serve as a model for other
regions.

BerkShares have transformed the way the Berkshire community thinks about
money. Over 1.2 million BerkShares have been issued from eleven branch
offices of five local banks in its first year of operation. Residents
purchase BerkShares at ninety cents on the dollar from one of the exchange
banks. Participating businesses accept BerkShares at full dollar value,
offering a 10 percent discount incentive to consumers for trading locally.
Businesses can then recirculate BerkShares at full value with other
businesses, or if more BerkShares are received than can be used, BerkShares
may be exchanged back to federal dollars at 90 cents for each BerkShare.

Beautifully designed and printed, the currency honors local historic figures
and features landscapes, streetscapes, and gardenscapes by local painters.
It reflects the culture and values of its place. Residents are proud to
handle and display the notes.

Once in circulation BerkShares provide much-needed support to the local
businesses of the region. BerkShares have helped to redevelop relationships
between producers, merchants, service providers, and consumers that had been
lost to the continued growth of the global economy. People are returning to
Main Street and experiencing new conversations about the important role
money plays in determining economic policy. They are seeing how BerkShares
spent at local businesses circulate through the community, creating value
beyond the initial point of purchase.

For both businesses and customers BerkShares provide a talking point about
supporting independent business, the importance of local economies, and the
possibility of regaining economic sovereignty.

BerkShares currency is in its research and development phase. In this
region with a population of only 15,000, nearly three hundred prominent
businesses are formally signed on to accept BerkShares and many more do so
informally. Growth in use is steady. Still BerkShares is only at stage
twenty of fifty stages in building a truly independent local currency that
will be an engine for local sustainable development.

Future plans include identifying new import-replacement business ventures,
making loans in BerkShares, fostering greater philanthropy in BerkShares,
and eventually creating a local standard for the currency independent of
fluctuations in the federal dollar. For example, Buckminster Fuller
envisioned a kilowatt hour currency backed by renewable energy sources.
These energy sources‹inherently local in scale‹produce a necessary commodity
with a relatively fixed value. In this way the value of the currency would
be directly tied to the ability of the community to expand local production
of renewable energy, creating value within the community for other
productive purposes.

This international and national attention to the program helps earn the
outside grant funding necessary for the current innovation stage of
BerkShares development. The Drucker Institute just announced that the E. F.
Schumacher Society is a finalist for the Peter Drucker Award for Non-Profit
Innovation for its BerkShares program.

All the evolution of the program must occur organically with support of the
local community behind it. BerkShares board of directors is deliberately
staging this growth.

Our still locally owned banks have proven invaluable partners in the success
of the BerkShares program, providing, among other things, eleven brick and
mortar offices where the public can exchange federal dollars for BerkShares.
Berkshire Bank is taking the lead in developing BerkShare checking accounts,
debit cards, and ATM. These innovations will increase the velocity of
BerkShares trade between customers and businesses and from businesses to
business. Increased circulation of the currency between businesses is a
vital step in the creation of local enterprises producing for local
consumption.

Berkshire Bank and Salisbury Bank are encouraging BerkShares to expand
outside the present area of operations to all of Berkshire County. To do
this would require additional staffing and a larger marketing budget. The
bank is providing seed funds to conduct informational meetings for this
initiative.

While still dependent on the funding, staffing, and research of the E. F.
Schumacher Society, the directors of BerkShares, Inc. are assuming ever
increasing responsibilities and building their knowledge and practical
skills around currency issue. Once the currency has moved from the research
and design stage to program maintenance, BerkShares, Inc., representing the
businesses, banking, and consumer communities, will assume direction for the
program and finance operations through a fee to businesses. The board has
set a priority on continuing public education about the underlying
principles that guide local currency issue in general and BerkShares in
particular.

Potential as a Model

The E. F. Schumacher Society will continue in its role of providing
information to other regions about the potential and practice of local
currencies. To that end it has been diligent in creating a record of the
BerkShares program at www.berkshares.org. Included on the site are
documents and images pertaining to the design process, collaboration with
the local banks, outreach to businesses and consumers, launching of the
currency, innovations and changes to date, and plans for the continuation of
the currency.

Our intention is to demonstrate what is required to shape a currency
appropriate for an individual region. Local currency is a flexible tool
that can be used as a support mechanism for local business or as a step
toward economic self-reliance. BerkShares are creating a framework on which
these different initiatives can be based.

The E. F. Schumacher Society is being helped in this process by Excelsior
Printing‹a division of Crane Paper and printer of the BerkShares currency.
Excelsior has had so many inquiries about printing currencies for other
regions that they wish to co-develop an information package based on the
BerkShares model, including information about currency grade paper and the
incorporation of security features. Excelsior's involvement in developing a
platform for launching local currencies will facilitate the proliferation of
the model.

Local currencies represent a trim-tab approach to enacting Jane Jacobs's and
Fritz Schumacher's vision for sustainable economies. BerkShares are the
leading application of the concept. When BerkShares are used it is assured
that the highest percentage of each dollar spent will remain circulating in
the community. This increase in community capital creates a positive
environment for new entrepreneurial ventures. New businesses sprouting from
this generation of wealth begin replacing the imported goods that were
originally drawing money and resources from the region. Instead of relying
on the products of a vulnerable global economy, transported over long
distances and using fossil fuels, the region gains greater control over its
own economic destiny.
Posted by Mary Anne Davis at Thursday, July 19, 2007 No comments:

Yesterday a wonderful event took place in Great Barrington, MA, which, in spite of rain, speaks to so many issues of local movements; sustainability, handmade, modern and myriad in between. Berkshares are a local currency, in development for umpteen years, launched a year ago. Last week, the million dollar mark had been achieved and the currency is well on its way to being the most successful alternative currency in US history. Bill McKibben spoke at the event in ardent support of Berkshares and the historic nature of the community's effort. 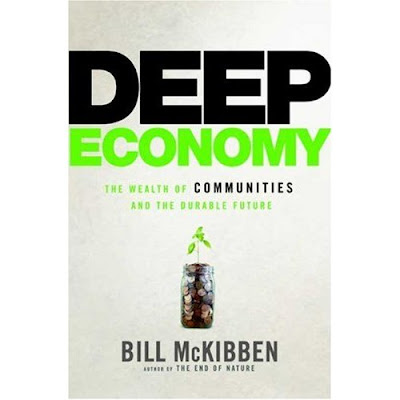 I accept Berkshares for my work and plan to continue to report on developments as they are revealed.... Yet another way to remind ourselves of "where does it come from, what is the impact of its making on the planet, where will it end up?" 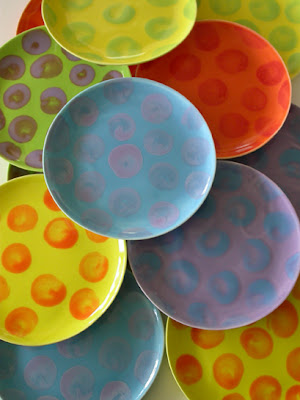 I pulled these out of the kiln this past Saturday. A client ordered them last week, and I was able to glaze them and have them ready for her husband's birthday cake, Saturday night. Kind of cool.

July is here and with it warm days, summer camp and imaginative possibilities.
Posted by Mary Anne Davis at Monday, July 02, 2007 No comments: