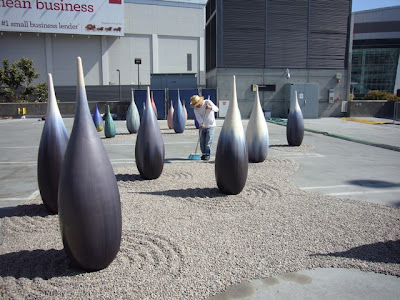 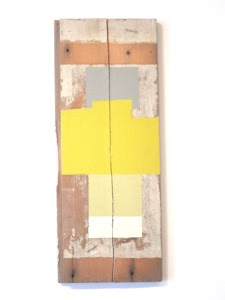 Jean Feinburg's work is constructed from repurposed wood, possibly from crumbling barn structures or other scarred effigies. She constructs simple configurations that are then carefully painted with muted tones, earthy and calm. Shapes are masked, edges are crisp. There is comfort in the work in spite of the rough hewn materials. These are objects of quiet beauty, well crafted and cared for. The works date from 2002-2011 indicating commitment to a process and style. Feinburg employs very simple and specific modes of conveying a refreshing arithmetic of squares and rectangles. One piece that gives a sense of spiritual essence is "Splitsville" 2009 16" x 10" -- a cross painted on a piece of wood that has a crack down the center. The title belies the shape of the geometric figure on the wood structure. A cross. Iconic and unmistakable. 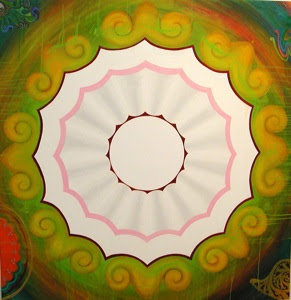 Emily Cheng is an artist who has embraced the beautiful without apology. Her paintings "Spin" and "Flutter" both from 2005, resemble lengths of fabric tied into a knot and fluttering in the breeze. Their red border serves to differentiate the edge in a striking separation between the object and the ground of the painting. "Canopy" takes the shape of an umbrella and turns it into a mandala, rotating around a ground of arabesques with detailed surprises around the edges of the canvas. Paint drips dry in different directions, suggesting the canvas was worked on in rotation . The texture of the paint is left as evidence of the making. "Protecting Three Graces" is an earlier work, a monotype of layered imagery -- Botticelli's "Primavera" and eastern thangka images with Cheng's own shapes. A curious juxtaposition of Asian and European art history. 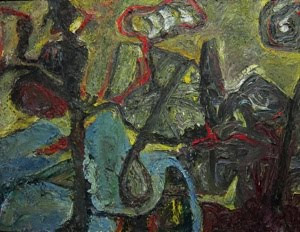 David Paulson's painting has the heroic quality of a demonic nature. The visceral work is thickly painted in oils or acrylic and pays homage to modernist artists such as Andre Masson and early Jackson Pollock. Paulson uses paint to build up a surface that emboldens his graphic abstractions and layers color in ways that repel while drawing the viewer in. Painting with such physical quality is difficult to fathom in its purely formal elements. "Startled Figure" 2009 is an emotive, anxious response of the startled figure. A nervous agitation beckons the viewer to reflect on her own irritable volatility. Black scumbling and raw oozing acrylic, hardened and caked on the surface exhibit an organic, primitive quality. Brutish and dark. "Homage to Masson" 2010 is expressive, emoting the pure joy of laying paint down on a surface. An homage to the early surrealist Masson suggests Paulson uses automatic drawing in his work and the composition certainly supports this assumption. Automatic mark making creates a completely non-objective picture in a manner used by the surrealists, but in the hands of Paulson, renders a romantic possibility of immediacy. 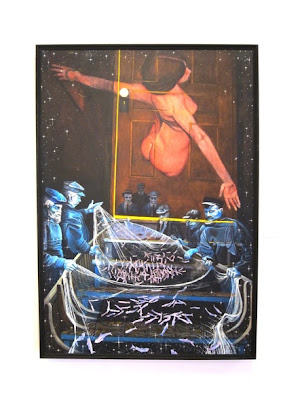 Tom Hope's one picture in the show, "Down to the Waters Edge" 1996 is the most narrative piece in the exhibit. Mythic in scope and large, 66" high x 46" wide, the painting seems to evoke a dream. Fishermen surround nets of fish laying in a boat that becomes a stairway leading up to a door where a nude woman floats above them all. Watching men stand a bit back from the fisher men, taking stock, perhaps to bid on the fish or take their cut. The entire picture is floating in the night sky with stars in the background. Much more illustrative than the other works on the show, Hope's work has a surrealistic quality. The dream evokes a mystery and captivates the viewer in its puzzling allure. 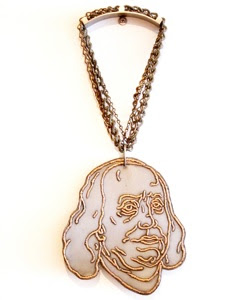 Michael Tong has several different types of pieces in the show. His works on paper are reminiscent of Chinese landscape painting. "The Big Pink" 2007, 60" x 82" is a watercolor/guache on paper. To begin with, the color itself is a surprise. Pink monochrome sets the stage for the rest of the picture which includes tiny humorous tableau in the distance. Trucks and unexpected figures clamor up the hillside in a quietly anomalous mise en scene amidst the grandeur of this pink mountain scape. "Lakeside" 2007 also calls to mind Chinese landscapes, but again, the quirky inclusion of a modern home on stilts in the water and a two story american cabin complete with brick chimney and motor boats harboring next to their fantasy domiciles leaves one smiling if not outright laughing. Humor is clearly an aspect of this artists intention. His jewelry is also pretty funny. In particular "Ben Franklin" 2003, welded bronze on steel is an impossible golden chain with the symbol of an American hundred dollar bill on it. A wry wink at the golden chain culture.