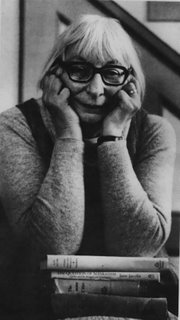 Jane Jacobs died on Tuesday, just short of her ninetieth birthday, her son by her side.

The 1983 Annual E. F. Schumacher Lecture program was my first introduction to the extraordinary intellect of Jane Jacobs. In her talk "The Economy of Regions," she argued for regional economic diversity, complexity, and interdependence. She imagined a myriad of small industries producing for regional markets ­ small industries that depended on local materials, local labor, local capital, local transport systems, and appropriately-scaled technology to conduct business. She pictured the fruits of this regional industry spilling over to support a rich cultural life in the city at the hub of the region. This bustling creative energy would then foster new innovation and industry, filling in the "niches" of the economy.

"Cities don't work like perpetual-motion machines. They require constant new inputs in the form of innovations based on human insights. And if they are to generate [vibrant] city regions, they require repeated, exuberant episodes of import-replacing, which are manifestations of the human ability to make adaptive imitations . . . "

In the question period following the talk, Jane Jacobs was asked how best to foster these regional economies. Her answer was "regional currencies." She called regional currencies one of the most elegant tools for stimulating and regulating production and trade in a region.

Bob Swann's eyes flashed and his knees trembled. He was a staunch advocate for local currencies. Was Jane Jacobs a partner with him in this advocacy? He could not wait to query her more.

He had his chance on the drive back to the airport after the lecture, talking eagerly about the role of regional currencies in shaping regional economies. We described the SHARE micro-credit program that the Schumacher Society had helped to launch in Great Barrington as a way for a citizen group to gain experience in making productive loans to small businesses.
SHARE was our first step in an initiative to launch a local currency.

As she got out of the car, Jane Jacobs turned to Bob and to me and said, "You know that $500 honorarium for speaking? Would you take it and open a SHARE account for me? I want to participate and so stay informed about what you are doing." She said it with a twinkle. She knew how it would delight us.

That was when I first experienced the great warmth of spirit of Jane Jacobs. She championed the "ideas that matter," but she also championed the people putting the ideas into practice. In her book "Systems of Survival" one of her characters describes the details of the SHARE program, and in "Dark Age Ahead" she points to the E. F. Schumacher Society's work with community land trusts as one of the positive indicators of the renewal of American culture.

During Bob Swann's last years, as he struggled with his health, hand written notes from Jane Jacobs cheered him on. And unexpected phone calls have cheered and encouraged me.

The world has lost a great intellect. At the Schumacher Society, in addition, we have lost an advisory board member and a dear friend. I can think of no finer way to honor her than for us all to foster "exuberant episodes of import-replacing" in our local communities.

Susan Witt
For the Board of Directors and Staff
E. F. Schumacher Society

I`m reading 'The Death and Life of Great American Cities' at the moment.

She has such a clear way of looking at things, and keeps the language simple, which is nice for someone like me who is new to planning.

I've been doing quite a bit of reading on New Urbanism recently, and taken from her book...which is often referenced by New Urbanists, i think she would have some significant issues with what they are doing, although she doubtless prefers the concept to urban sprawl.