Shut Up and Sing 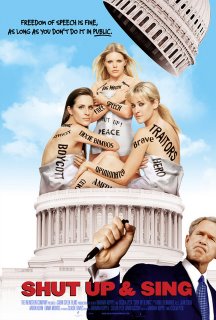 I saw the new Dixie Chicks movie "Shut Up and Sing" last night at the FILMCOLUMBIA Festival, in upstate New York. May I just say, see it. It will be released October 27th in New York City and Los Angeles and elsewhere November 10th.

Natalie Maines said she is embarrassed the president is from Texas at a concert in London in 2003 which devastated their standing as the most popular country band in history. The film documents their story, how the public responded and how they are pushing back.

This film is a must see for anyone interested in civil liberties, freedom of speech and of course, Dixie Chicks fans! I came away from this movie touched by these womens' bravery and convictions.

Check the archives on this blog for "now for something completely different" to see their music video, "Not Ready to Make Nice".

fab fab fab. keeping me in the loop mad.
yesterday was nuts. still breaking down from saturday... let's talk on friday?

Their video is powerful. I am impressed at their gutsiness to stand up sing and not shut up after such an ordeal. I look forward to the movie.