Betty Woodman at the Met 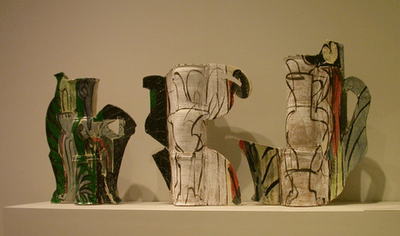 I finally saw the Betty Woodman show at the Metropolitan Museum of Art in New York last week, during the final week there. Seeing this show was remarkable on several levels. First, Woodman's show is the first one of its kind; a one person show of American ceramics at the Met. Her work is mature, confident and beautiful. Influenced by many historic ceramic styles, Etruscan, Greek, and others as well as architectural fragments, which she combines in relief and sculptural forms based on the vase. As an artist who has embraced painting in ceramics, I am moved and inspired by her work and inovation.

The second important factor, for me, is my relationship with Woodman. I worked for her in 1986 while I was a graduate student at the School of Visual Arts in New York and as such had the opportunity to get to know her and her husband George, also an accomplished artist. The Woodmans are amazing people - inspiring, committed, traveled and enlightened.

I am thrilled to have been a part of their lives and to have seen this exhibition, a tribute to an American master.

Exciting to get a review of BW's show at Met! We saw her one woman show at Pewabic Pottery in Detroit
many years ago and love that she has gone on to reach the level of American master.
Thank you for the review, MA

Finally. Lets hear it for Clay! The exhibit is long overdue but glad to have it happen now which is better than never.

Betty Woodman how exciting and what beautiful work.

thank you mad! lovely post and so good to know more about one of your mentors.

Bravo to one of the best modern woman ceramic artists. I have always been in awe of her semi - cubist work in clay and have always loved the drawings. A total inspiration to me - The Met is lucky to have such a fantastic woman artist.